Women of Warmth, Wisdom, and War

Discover all the events the Clear Lake Public Library offers for the community and its members.

This event has passed.

Women of Warmth, Wisdom, and War

Women of Warmth, Widsom, and War: Images of Native American Women in Westerns

Although film critics and viewers frequently dismiss Native American women in Westerns as stereotypes providing background for the action, a reexamination of Westerns reveals that Native American women characters often have more than a mere setting or sexual purpose. Despite the lack of Native American actresses in the films, the Westerns have depicted the Native American cultures with women as healers, counselors and even warriors. This presentation considers those Westerns readily available on video in order to offer the audience a new way to view old Westerns.
Check back later for the Zoom link. 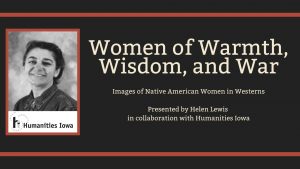